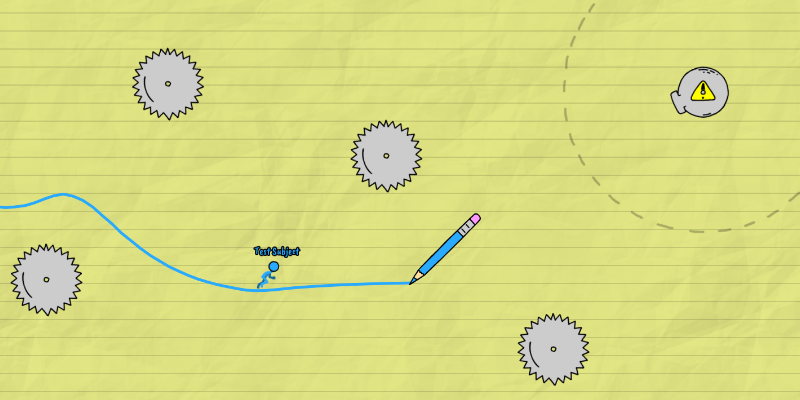 Scrambling for an idea

After taking a break from game development because of some burn out, I’ve figured it’s about time for me to return to it. I’ve decided to start on a project that’s a little simpler than some of my other ones to ease myself back into it. So what could be better than remaking a game from 2015 that nobody wanted in the first place? Well I have an answer, remaking a game that nobody wanted and adding multiplayer to it. So a few days ago I began work on a remake of my old mobile game Scribble Surfer that I am calling Scribble Surfer Scramble. Multiplayer won’t be the only addition however, as I’m also adding completely revamped art, animations, controls and some other cool things. 👀

Reusing the art from the original is not much of an option for a handful of reasons. It was rushed, boring and I no longer have access to the source. Now normally I don’t consider myself much of an artist but considering the style (or rather the lack of style) I think I have it under control. For drawing the sprites and animations I went with the same software that I used for the original, Adobe Animate, which was known as Adobe Flash at the time. At first, I was a tad worried that I wouldn’t remember how to work the program, but I quickly got the hang of it. I’ve realized the original style was fairly bland due to it just being some outlined shapes. To help solve this issue I made the mind blowing decision to add some color to it. 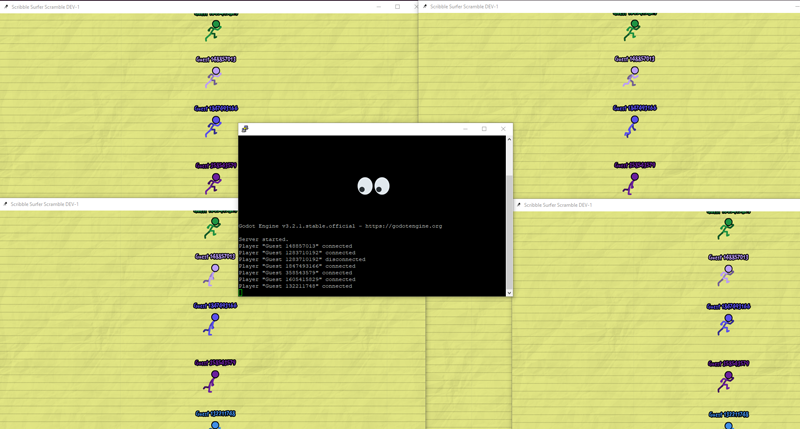 Before the next section I think it would be a good idea to go over how multiplayer works for the less technical folks out there. When you connect to an online game your computer is talking to something that’s called a server. A server is pretty much someone else’s computer that’s running code to read, process and react to information you send to it. When you connect to a server you’re considered to be a client. Clients are similar to servers, they read, process and react to information sent from the server but generally have less control over the application/game. This is to prevent people with bad intentions from making changes they are not supposed to.

Now here’s where things start to get a little more interesting. I usually prefer making my own implementations using a low level API, which is where you have finer control over how things work, but it takes a lot more time and effort to get running. For this game however, I’ve decided to use Godot’s built in high level multiplayer API and I’ve been liking my experience with it so far. A high level API is where someone has already made code or scripting to handle the heavy lifting for you, but it may not work exactly how you want it to. I’ve managed to get a simple server running where clients can connect and sync their positions. When a player connects they are assigned a random color and a username. Later down the road I’ll also make it where the player can login using the account system on the website and customize their avatars, but that’s not quite on the top of my to do list. For now I just need to focus on making the multiplayer work smoothly.

After showing some friends a few clips of the game so far, they mentioned the controls seemed kind of janky. I couldn’t disagree with them. At first I just replicated the controls of the original game, where the player would tap on the screen to set the height of their character. It doesn’t work too well for this type of game. They suggested that the player should be able to draw the scribble that the player surfs. I’ve gotten it to work by storing the coordinates of the pencil node inside of an array (a nerd’s fancy word for a list) every 32 pixels. It then draws lines between the stored coordinates using the player’s color. The player node will then find the two stored coordinates it is between and then interpolate the correct height from them and animates its rotation to match. The video above is the result. The obstacles still need some tweaks to work with the new controls a bit better but I’m very happy with it.

For the next devlog I hope to cover a few specific things. This will include starting on the UI, a title screen, fleshing out the networking and updating the obstacles. In the future I also plan on adding cosmetics and an in-game shop, but that probably won’t make it into the next devlog. If you have any feedback, suggestions or ideas make sure to leave a comment below, I’ll be reading them.

when is it coming out...

pretty excited to play this O_O

Im hyped to play the game

I would love to test

i wanna play so bad omg

In my first devlog I cover my work on a new Scribble Surfer game. I talk about animation, networking and some cool new controls.